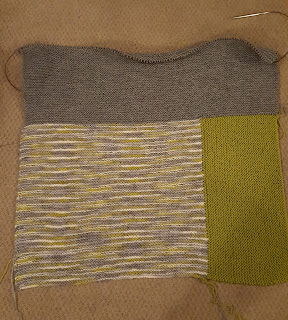 It has been a long time since I knit a blanket for Ethan, but he has been asking me for a BIG blanket since I finished knitting Owen's blanket back in 2015. Though I didn't think it was that long ago ... wow. Anyway, I was sort of waiting on Ethan to decide what colours he wants his bedroom to be before diving into a blanket for him, and at last he has decided. One wall (maybe two) will be a bright green - chartreuse - colour and the others grey (the same grey as Owen's bedroom - yay leftovers).

I had originally intended to use the same pattern for Ethan's blanket as used in Owen's, but, as I was searching for the Ballband Dishcloth pattern in the Mason*Dixon Knitting book I came across the Moderne Log Cabin blanket pattern and thought "ah ha, this would be great!" I showed it to Ethan and he was sold. We collaborated on the order the colours would go in and modified the pattern ever so slightly and then I cast on.

It's a lot of garter stitch. Good thing I love him.

I'm using Patons Decor yarn, because, in my opinion, there isn't a better yarn for blankets for a boy that is rough and tumble. It's washable, durable, has great drape and is warm. Perfect. I think by the end of this I'll use around 20 balls of it. That's a lot of yarn.

I know you're shocked. Another finished knit. I'm shocked too. It's a cowl for Lily. She picked the yarn (Wandering Cat Yarns, of course!). The colourway is Juke Box. 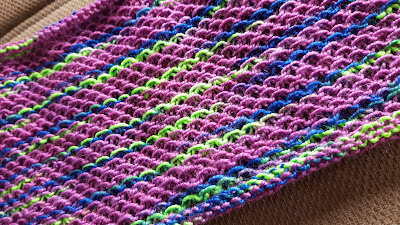 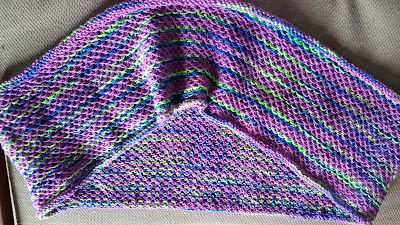 Now onto some xmas knitting. :)