We fly out from Buffalo on Thursday morning! I'm excited. It's my first flight ever and I've been asked if I'm nervous, but I'm not. I used to swear I'd NEVER go on a plane, but I changed my mind ... life is too short to not take an adventure.

We're staying at The Boxer hotel. Reviews are good, it's close where we need to be and the only complaints seem to be that the rooms are small. Well ... rooms are for sleeping and other fun stuff, so size isn't really important. LOL 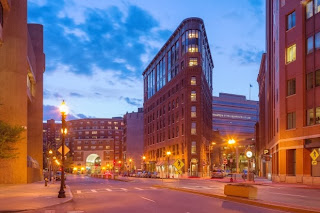 It was built in 1904 and has recently undergone some renovations so I'm hoping it's a little bit haunted. A little bit or a lot. You know, either works for me. I'll keep you posted!!

In nine days Michael and I will be boarding a plane and heading to Boston, MA for an adventure without the children. When we were married in 1998 we couldn't afford a honeymoon, so we're making up for it now. I cannot wait! It's going to be fabulous! 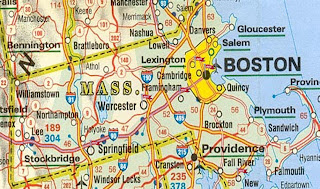 In May he posted an adorable video he made to my Facebook wall telling me I'd won a trip to Boston and listed the things we're going to do while we're there. I had NO idea he had planned it, but he did and it was a wonderful surprise. On top of seeing all the sights and doing the tourist thing we're going to a Michael Bublé concert! Front row floor seats. AMAZING. I tease that we'll be close enough to be sweated on, but (a) I don't really want to be sweated on and (b) I don't really want to be sweated on. But yeah, we'll be close! :)

I think I've got everything I need ... except black ballet flats, but I'm thinking I need to go shopping for some next week. :)
I haven't started packing yet (though my OCD really wants me to start so I'm EXTRA prepared) but I have a list of all the necessities. :)

When I was a young(er) version of myself I would lay on my bed, music cranked as loud as my parents would allow, or if they weren't home, even louder, and just listen.

Listen and feel and think.

The band I listened to most back then was Guns N' Roses and frankly they still round out my top five all time favourites.

Today I was feeling nostalgic so I sought out a couple of my favourite pieces. The music compilations this band put together were beautiful. Yes, it's metal, yes, it can be edgy and hard, but if you listen, full on and truly listen, it's expressive and complicated.


Second November Rain -- Michael is not a big Guns N' Roses fan, but even he has to admit this is musical artistry at it's finest.


I'm still that girl -- the one laying on a bed with the music turned up loud. Only now my parents aren't here to tell me to turn it down.
at September 16, 2013 1 comment:

Adolescents are a pain in the arse. Not only can they be mouthy, but they bring upon the word "No" a lot and that's not a word I'm too fond of using.

You may think I'm talking about my oldest son (who will be 12 in a couple months and is the epitome of a pre-teen) but no, him I can handle. I'm referring to the 8 month old chocolate lab puppy who has taken it upon himself to turn his ears off completely. I just keep telling myself (a) it's a phase and it'll pass and (b) it's not illegal to crate a puppy! :)


I've been knitting since I was about 8 years old and knitting on a regular basis since 2003 and I finally completed my very first adult sized sweater ever. And it's for ME!

The pattern is the Eyelet Cardigan from Custom Knits 2 by Wendy Bernard. I knit a size small. I'd debated between a small and a medium (and even asked my knitter friends FB what they thought) because I had no idea what would fit me (since my weight loss). So glad I went with the small. It fits wonderfully!

Sorry about the crappy cell phone pictures, I was lazy and didn't want to get my Canon out.


I was also unsure of what kind of button to use, so I put a question into my best friend Valerie and once again she didn't let me down. She came over with a stash of buttons she thought would suit it and in about 35 seconds we had come to a final decision. Thanks again Valerie!! :)


Michael has a friend who's wife is due with their first baby in December and has asked me, ever so nicely, to knit them a few things. How can I resist!? They're having a boy. :)

I think I've chosen my next adult sweater and it, too, will be for me! I will save that post for another day though. :)

When was my last post? June, I think, and it was pretty scarce around here before then. I could go on and on and on about promises to blog more often, but that'd be pointless. I enjoy blogging/writing but getting the inspiration is sometimes ... well ... impossible.

What's been going on?

Not much and lots all at the same time.

As you know Michael took a job in Saskatchewan last September. Anyway, that project finished up about 4 weeks ago and we've been having a lovely summer together. We bought a (motor) boat, did some camping, did some beaching, swimming, water skiing and tubing and lots of other fun stuff. It's been a fabulous summer.

All good things must come to an end.

The kids are back in school and without trying Michael was offered another job out West. Another Saskatchewan project, but with a different company. The house will be strangely quiet without him (or the kids) home during the days. I'm sure I will find something to do with my time (aside from regular boring ol' household stuff).

Knitting has been pretty great. I don't have any pictures to show you here, but if you head over to my Ravelry page you'll be able to see the stuff I've remembered to add.

I've read some great books this summer too. The 100-Year-Old Man Who Climbed Out the Window and Disappeared, Orange is the New Black (also an excellent series on Netflix), The Light Between Oceans, 419 (which I'm currently reading) and a few others.

Running and fitness ... same as usual. Still keeping fit and being healthy. :) My next race is October 6th.

In 21 days Michael and I leave for Boston. We're going to be spending 4 kid-free days there. On the 27th we're seeing Michael Bublé in concert. Front row FLOOR seats. AWESOME. We never had a honeymoon (way back in 1998) so we've decided we're due. I think we're going to go to Vegas in January. Florida next year some time too -- the kids want to go to the Wizarding World of Harry Potter (and so do I).

Moose is 8 months old ALREADY. He's a giant too ... not quite as tall as Dozer, but I'll bet he weighs as much. He's not overweight (no worries there) just a bit of a different shape. That could change with age and (body) maturity.