Today at karate class it came up (while I was sparring) that I'm a Knitter. My sparring partner suddenly got very excited and said "can you make slippers?" Um, yeah, of course I can make slippers. His reaction "Oh I want some! Make me some! I will pay!" ... one million dollars. Sorry kid (he's 24) you can't afford me. Of course I didn't tell him that at the time. He may be 24 but he's a much more experienced karateka than I and I didn't want to get my butt whipped. So I just smiled and kept going. He'll forget about it because, like I said, he's 24.

My 2015 run streak officially finishes up today. It has been a fantastic month. My grand total is 130.4km, which is about 50km more than I ran in the February Run Streak in 2014. 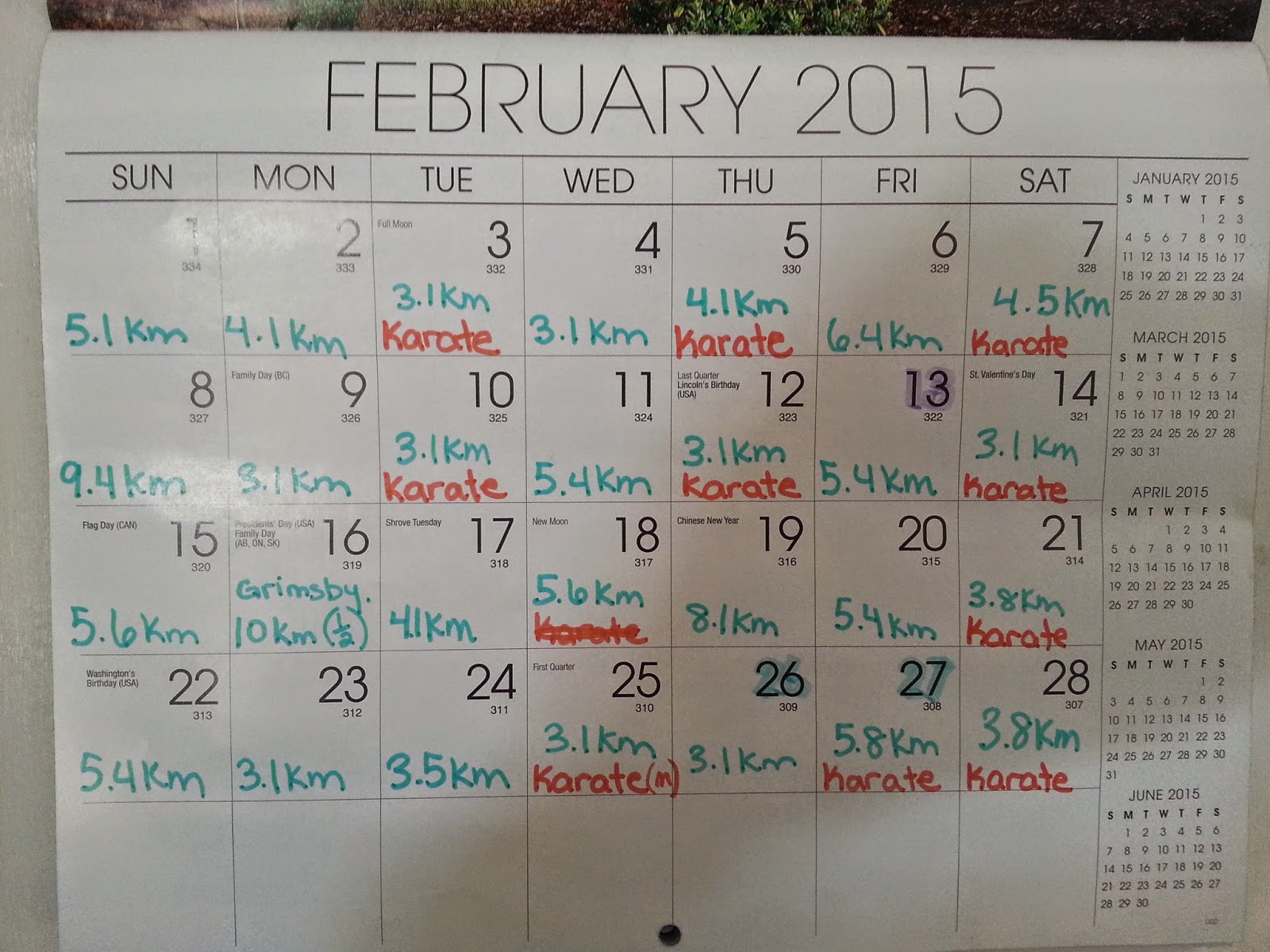 Today I opted to run my final day outside. I ran to the dojo and had planned to run back, but the 90 minute sparring class really tuckered me out. Plan B was to take a cab home but when I said I was going to call a cab my Sensei (and new-found run buddy) offered to drive me home.

Here are a couple of pictures from my run today. It was cold, but so beautiful outside.

For now I'm going to sit back, relax, watch a movie or something on Netflix and knit (but not slippers for a 24 year old, lol).

There hasn't been much knitting at chez Running Tangled, but there has been a little bit. It's just a wee little baby hat, but it's something. I have been busy, though I can't pinpoint what I've been busy doing. 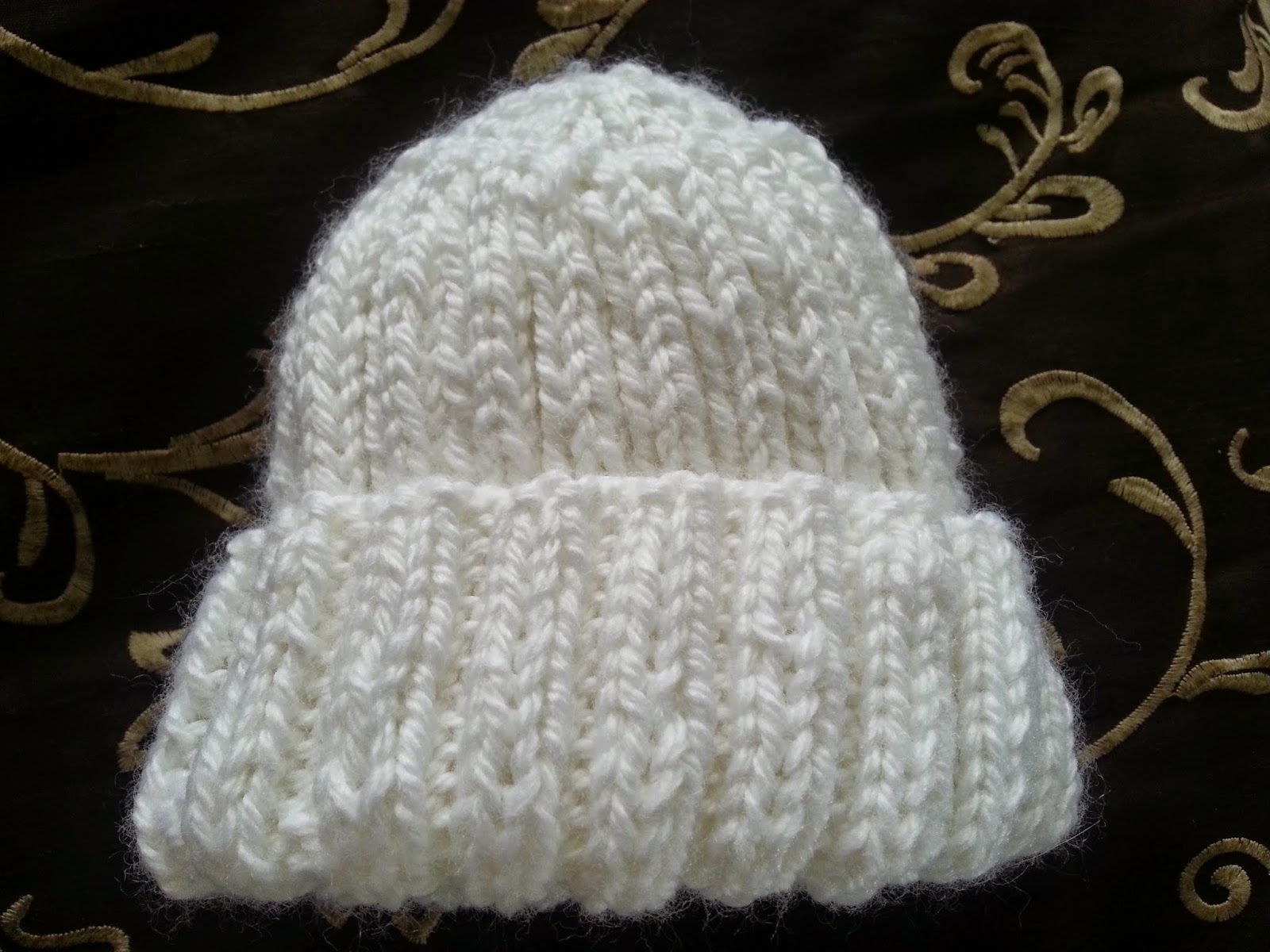 I ripped back the start of Cloud City. I hadn't gotten far, but I realised I messed up, so it got frogged. I'll cast on again shortly. It's going to be so pretty once it's done, but for now it kind of looks like this. 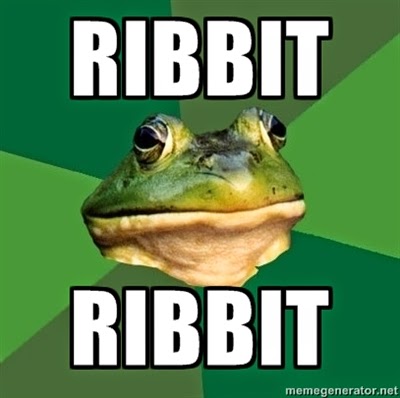 My run streak is going wonderfully. So far my run tally is 88.3km. I haven't missed a day and there are only 10 days (including today) left to do. The finish line is in sight!

Do you remember how I had booked a race for Family Day? Well it went better than I could have ever dreamt! I had hoped to run my 10km in under an hour, but was thinking 59:59 would be sufficient. My dreams came true and then some! My official finishing time was 54:51 and ... yes AND ... I came in first place in my age group (35-39) and got a gold medal! It's not real gold, but the feeling of elation is the same as if it were. :) 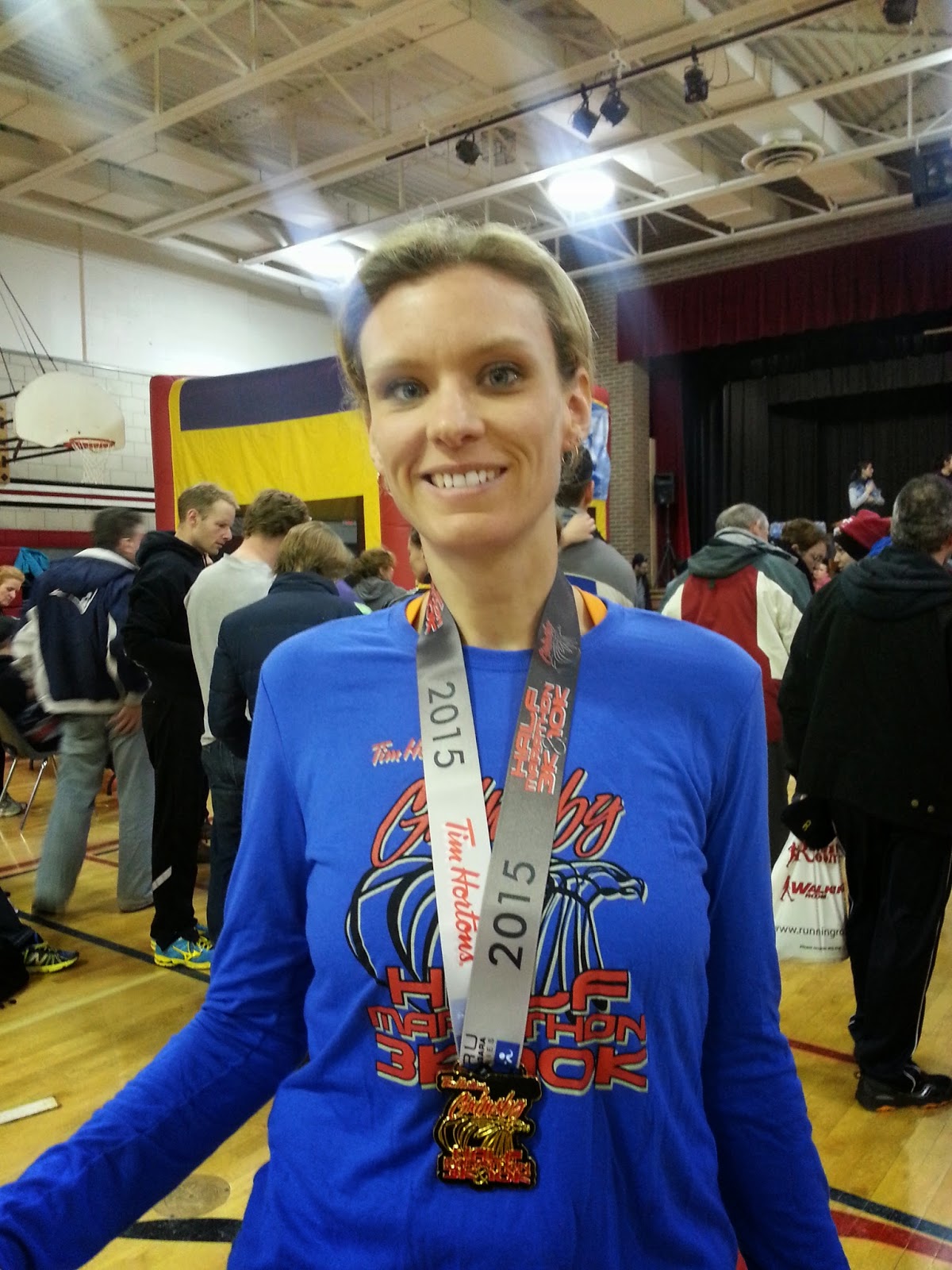 Michael's half marathon was cancelled because of extreme temperatures. Did I mention it was -26C with a wind chill of something much colder. The officials weren't worried so much about the runners who would be constantly moving and keeping warm, but the concern was for the volunteers who would be sitting (or standing) at the different stations along the route for 3+ hours. The half marathoners, hubby included, ran their own 10km race along the same route (at the same time as mine, but the results were calculated separately). He finished in a stunning time of 49:55. Like the wind. Both of us. 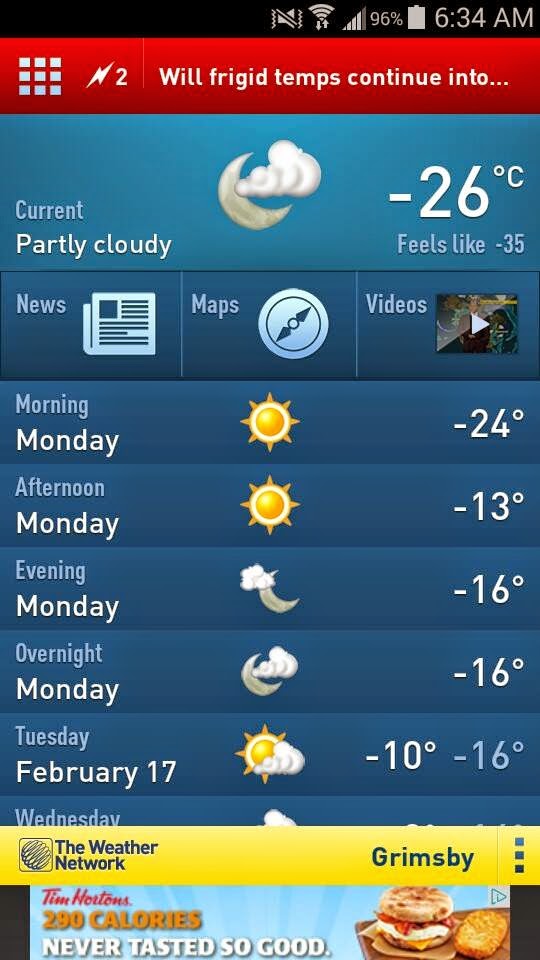 My truck is at the garage getting fixed. The fuel sending unit took a crap and started spewing gas all over the place when under pressure (so every time the truck was running). The part is somewhere in the area of $500-$700 plus labour. Yuck. I can't complain too much though. She's almost 11 years old and hasn't caused us too much trouble since we've had her. Also a $1000-$1500 garage bill is much easier to swallow than the cost of replacing her. Hopefully she will be home later today. I miss her.
at February 19, 2015 4 comments:

Today I headed back to the mall to pick up some running pants ... I bought a pair on Tuesday, tried them Wednesday, they're awesome comfy, so I picked up a 2nd pair with a different pattern.

I ended up with shoes too. Not running shoes though. Fancy shoes. I definitely needed (yes, needed) a pair of black pumps for my wardrobe, but when I was in the store they had the shoes on for BOGO. How could I resist!?! 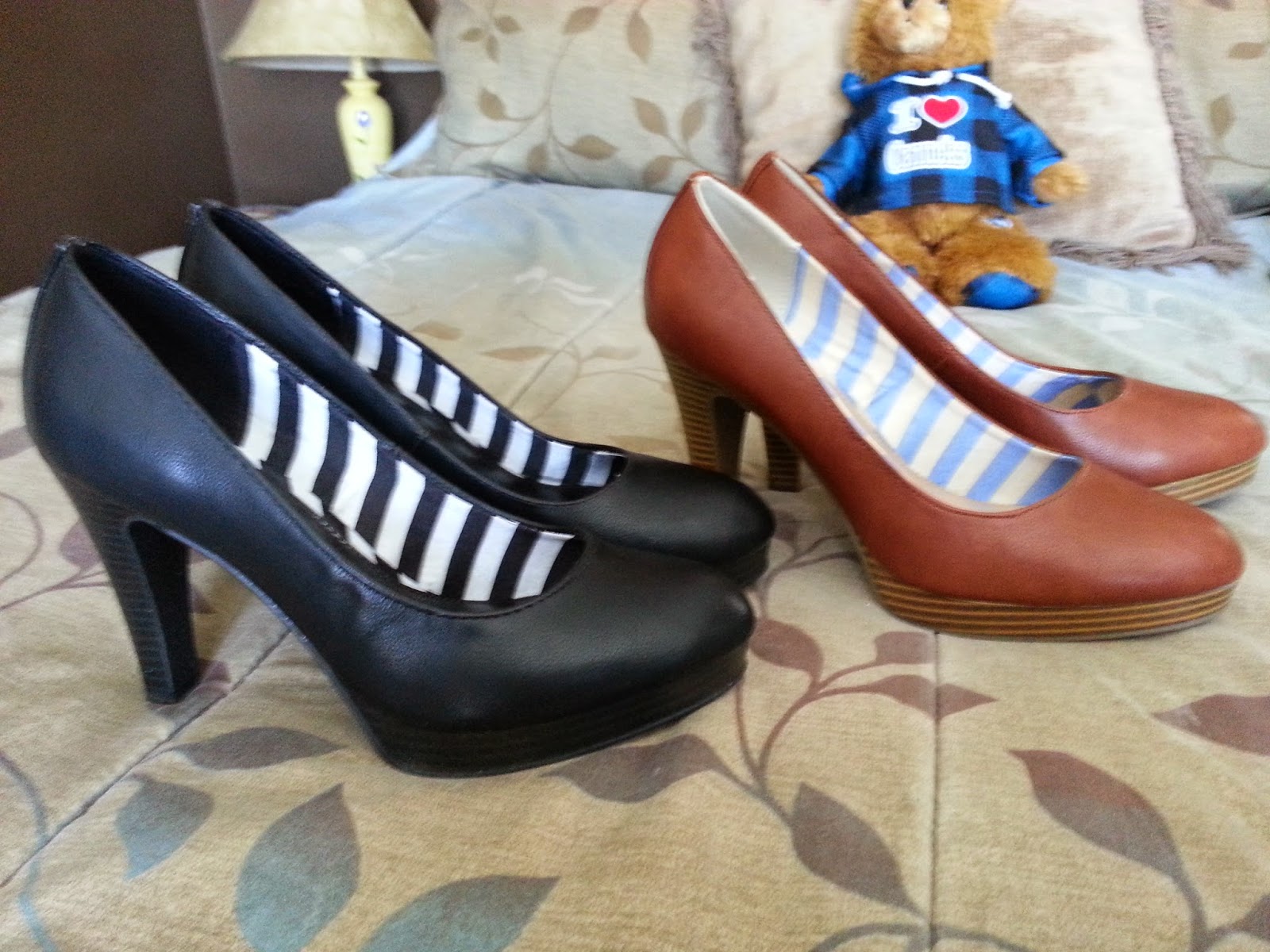 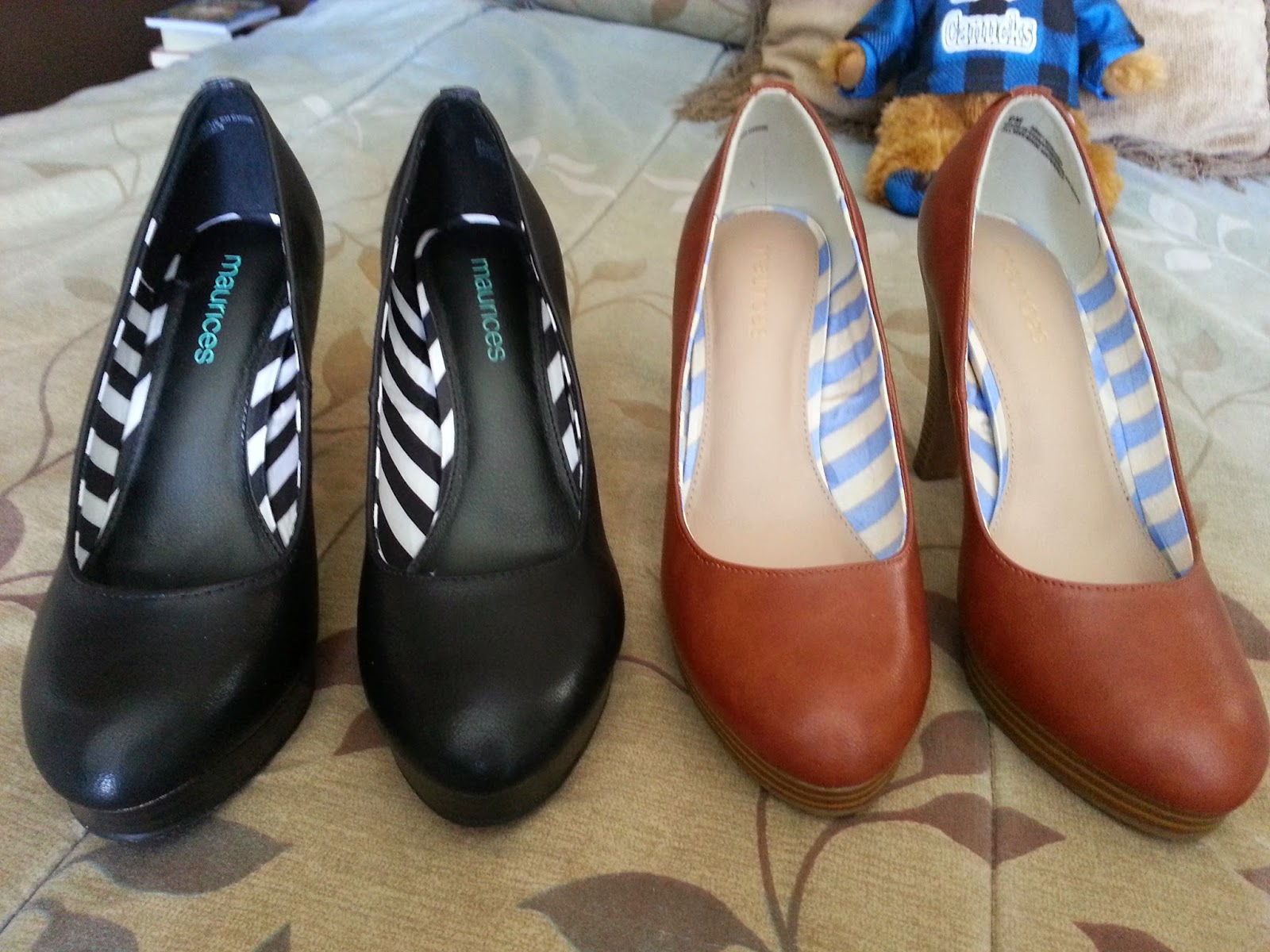 Shoes have a way of making a girl happy. :)

Last night, somewhere around the 11pm mark, my power went out with a BANG, flickered and went out again. I peeked out the window and the entire neighbourhood was black. Fast forward two minutes and the sirens could be heard, then they zip by my house, then more and more. It turned out to be a car, carrying 5 people, that flipped over and knocked out a power line. A 19 year old man was speeding and is being charged with impaired driving. As far as I have heard everyone survived with minor injuries. Which is good. After all that excitement I couldn't get to sleep until nearly 4am; not due to lack of trying mind you. The power came back on around 3:30am.

This morning I had a great karate lesson. It lasted two hours and after a night of no sleep it left me surprisingly energetic. Afterwards my sister and I went shopping and I bought this dress. Now I need some shoes and/or boots to go with it and a place to go. :) Lucky for me my husband likes to take me out for dates so I'm sure it won't be too long until I get to wear it somewhere.

Now I have to hit the treadmill for my run. It's much later in the day than I normally care to run, but I've got to get it done. I guess that's why it's called a challenge. Tomorrow I'm running at the track with my Sensei. He mentioned he wants to start running again so I said "how about tomorrow?" and he said okay. Fun! I love that I have my entire running week planned out. It really helps to keep me motivated.
at February 10, 2015 1 comment:

Weave Me a Story

I've been a busy girl this last week between karate and running and all the other life stuff I've done, I have not had much time for knitting (though I did finish a baby hat on Friday evening while babysitting my sister's two rug rats). Today after my run (9.4km today) I got to weaving in more of the ends of Owen's blanket. This is going to be a long and tedious job. 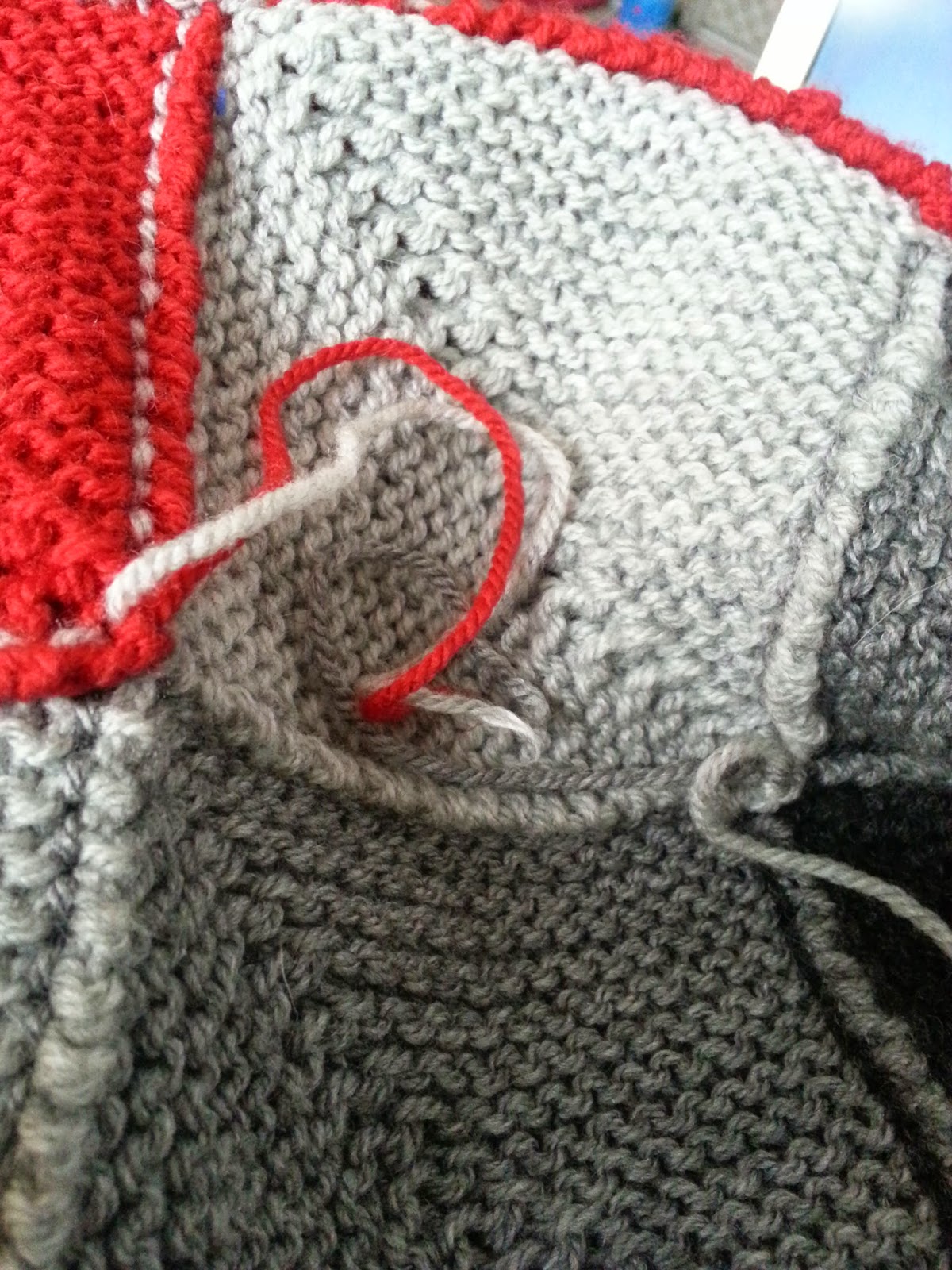 This week I had karate class three times. Usually it's twice (occasionally once/week), but this week our class hours were tweaked a little bit. Same with the upcoming week. I'm really working my ninja skills. :)

My run streak challenge is going well. In the first 7 days I ran 30.4km. That's pretty good, I think, then you get crazy guys like my husband who will run that (and much more) in one day. He was teasing me in a proud hubby kind of way. LOL

Saturday was Selfie-Saturday for the challenge group on Facebook ... mine wasn't too exciting. Just me on the treadmill before my run. 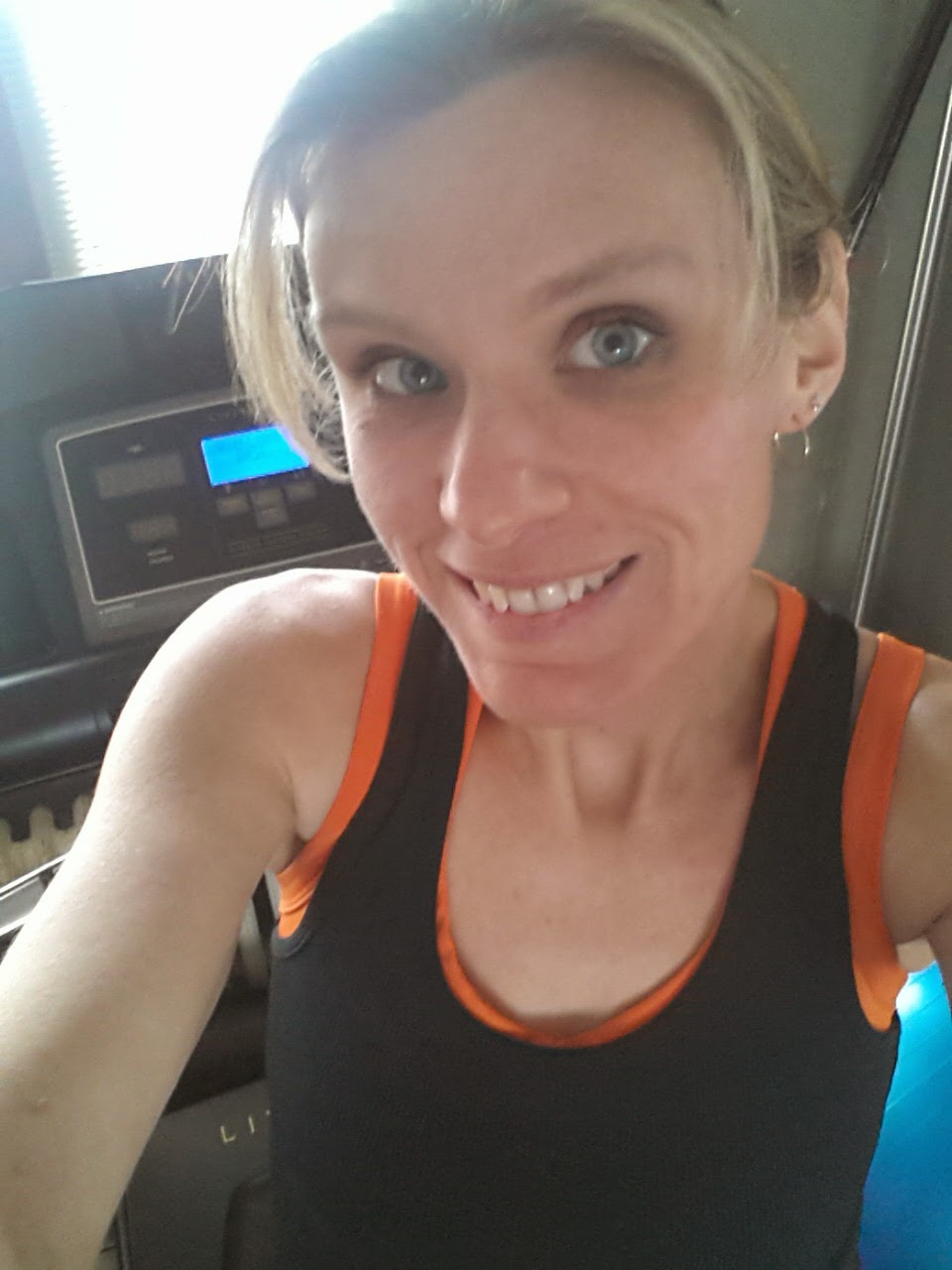 Between Mother Nature and Sensei (karate teacher) my upper body has had a great workout this week. I have two more karate lessons this week and I hear it's supposed to snow again Saturday night. I'm going to be so sore strong. My running challenge is going well too. It's only been three days (not including today, which is day four) and I'm 3 for 3. I'll be doing my today's run a little later. After some coffee and a snack.

I'm dreaming of Spring. Today I was looking at lawn mowers online. We will need a new one this year, so I'm doing some research in order to have a say in which one we buy. I'd love a cordless electric one, but the battery life on them is 30-45 minutes at a time and it takes me 45 minutes (or so) just to do my front lawn, so that'd be a pain in the ass. And it's too much yard for a corded electric mower. It's looking like we'll be replacing our old gas mower with a new gas mower.

I've also started designing my front gardens. I've lived here for 10 years and I've never had a plan of what I'd like to do with them. They've always been sort of messy and useless, but this year I have a plan and I'm excited to get it done. The only problem is there is 2 feet of snow on the ground. Boo. It's going to be great!

Last night at bedtime Ethan told me he was going to do "crossies" all night in the grand hopes today would be a snow day. It must have worked because when I woke up at 6:10 this morning and checked the board of education website they had announced a snow day. I've asked him to do crossies (fingers crossed) on my next Lotto Max ticket ... it seems he has some kind of magic touch.

It took me two hours to shovel out this morning. The snow was a foot deep at the lowest points and up to my hip in other places. Pretty gross. The good news is Wiarton Willie predicts an early Spring. Ethan has crossies for that too.

My run streak began successfully. I did a 5.1km run yesterday. It was good. :) 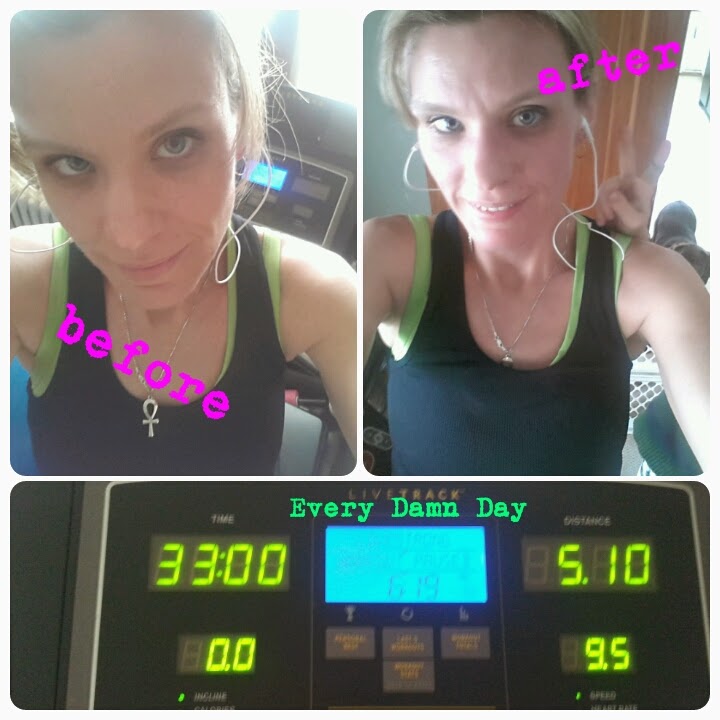 I finished the baby hat yesterday and started another one. It's just a simple rolled brim hat; stockinette stitch. 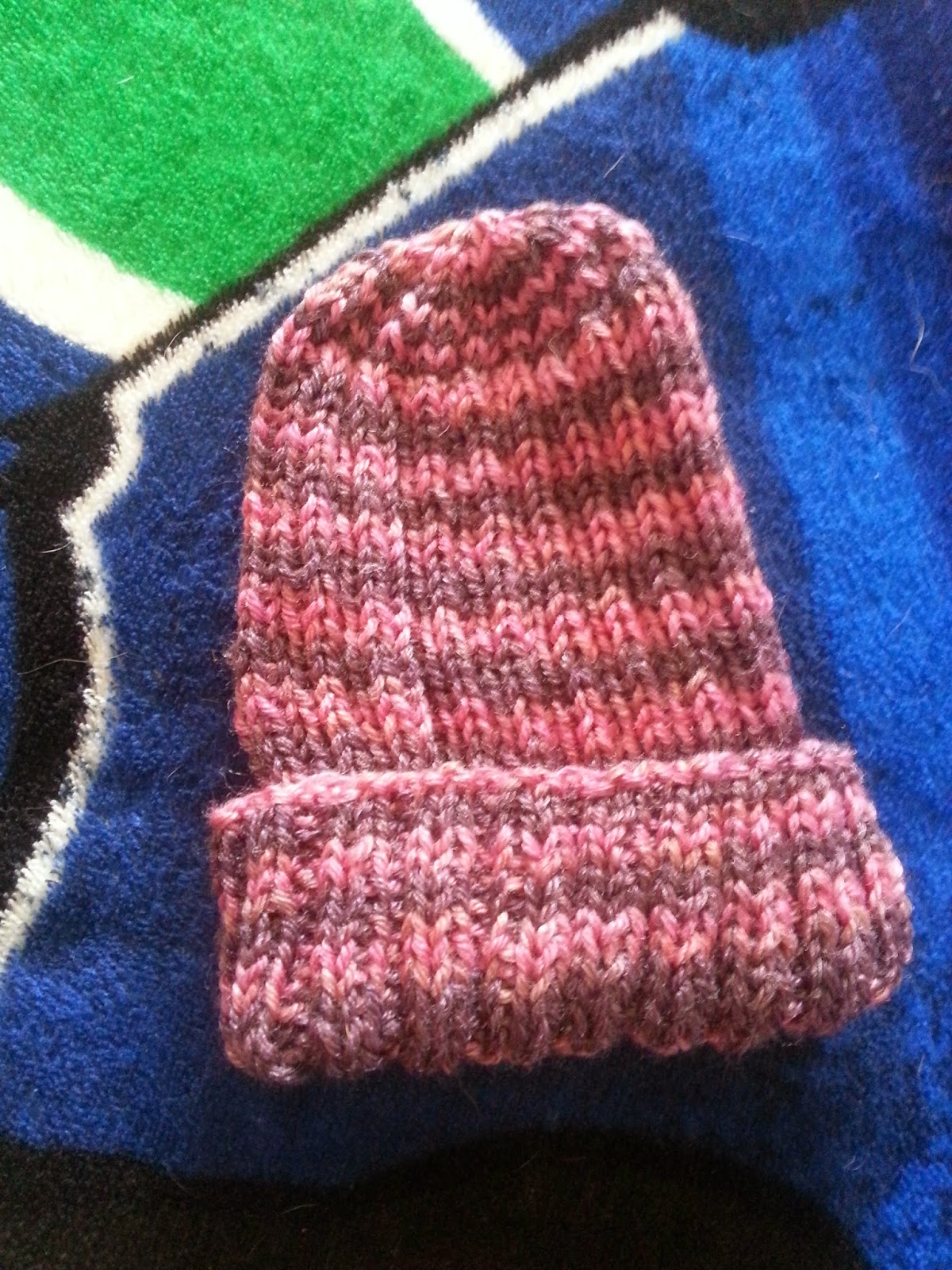 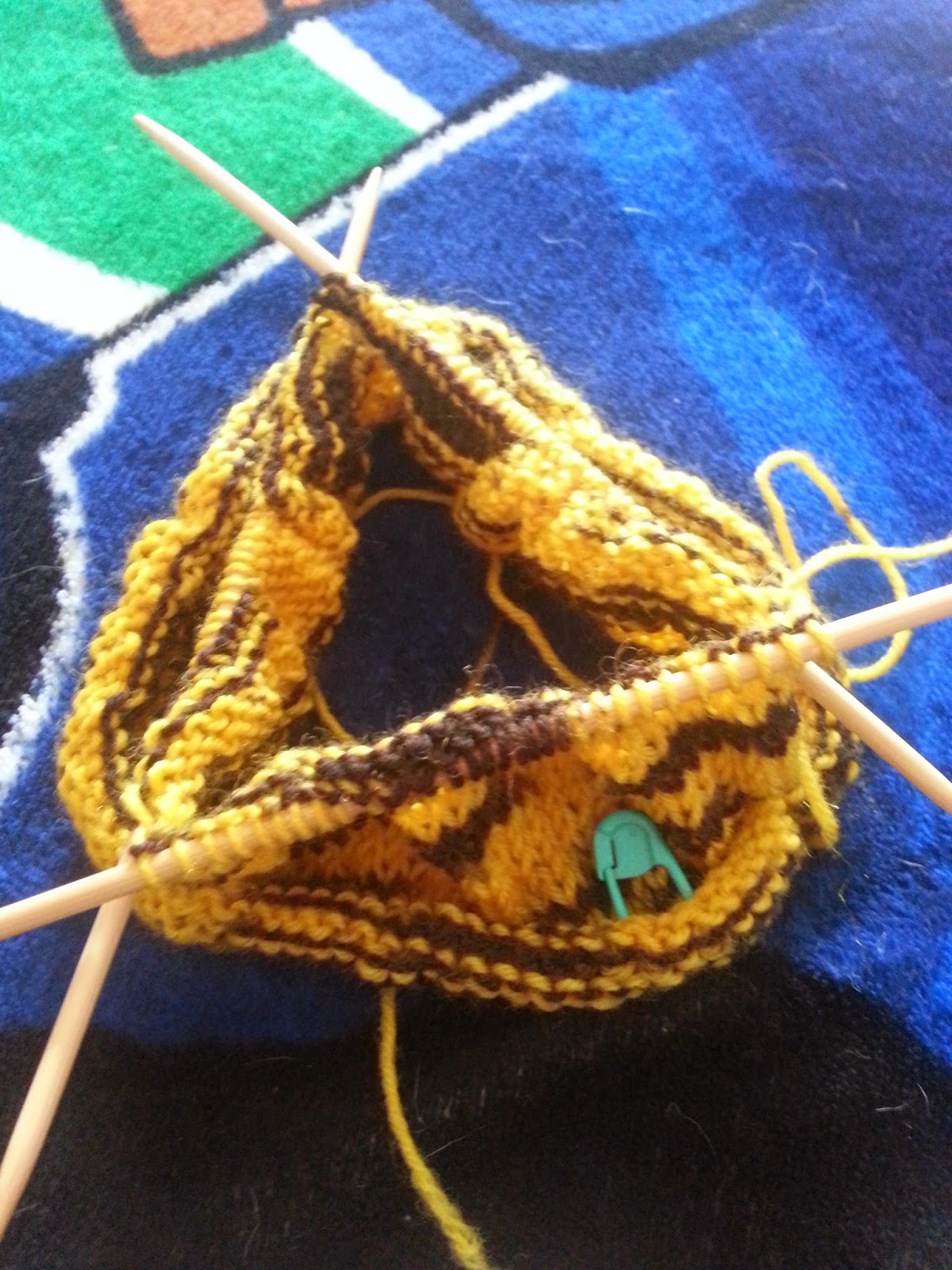 I am headed to the treadmill in a few minutes to get my run in for the day. Tonight I have to take Owen to guitar. The roads are mostly clear, but his guitar teacher works from home and he lives on a side street which is probably not ploughed yet. Thank Maude for 4x4.
at February 02, 2015 6 comments:

Today is the official start of the February Challenge I'm participating in. It's a Run Streak. I'm going to be running "every damn day" of February. ("Every damn day" is the motto of the group). I did this challenge last year and it was fabulous. Fun too, if you can believe it. My minimum distance for each day I have set for myself is 3km (last year it was 2km) but I'll be running a few longer distances. I'd like to get in 100km this month. Last year I did 83.5km. I know you think I'm crazy and that's okay. :) 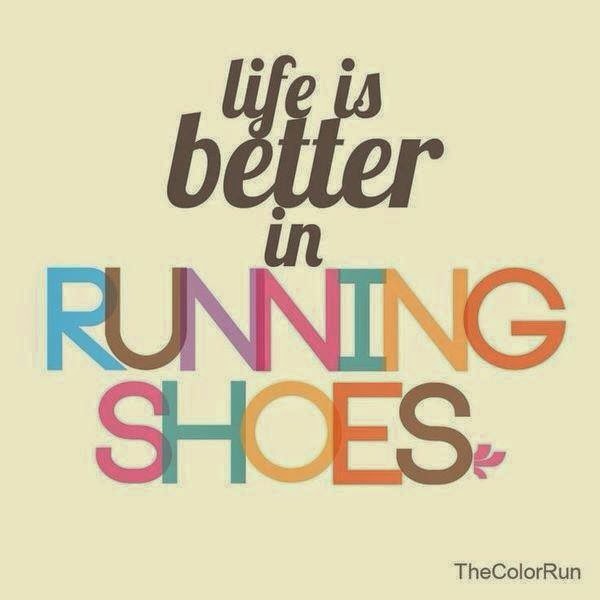 My OCD loves February this year. It's a perfect month. It begins on a Sunday (in my world, this is the first day of the week) and ends on a Saturday (the last day of the week). So perfect. So pretty. So symmetrical. 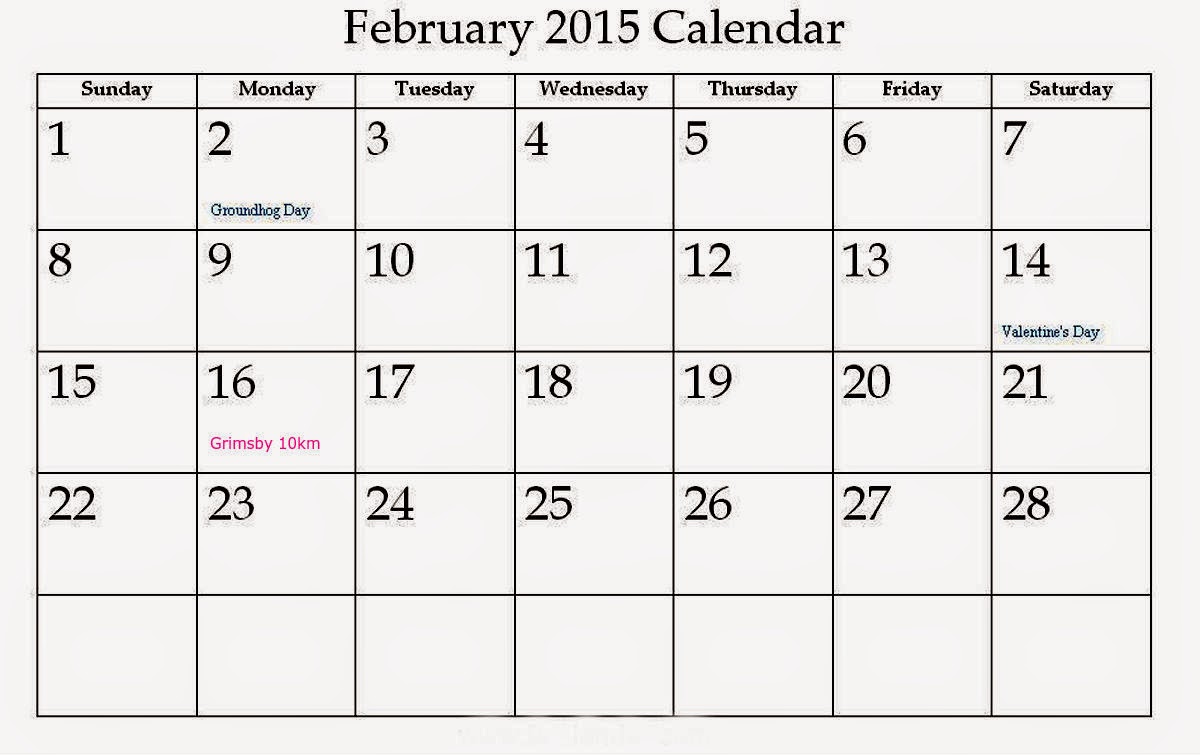 Yesterday I knit up this cute little baby hat. I used Patons Kroy Sock on 3.75mm needles. It's so soft and stretchy. How cute is it that it's smaller than Dozer's ear? Granted the boy has giant ears, but still ... such a tiny hat. 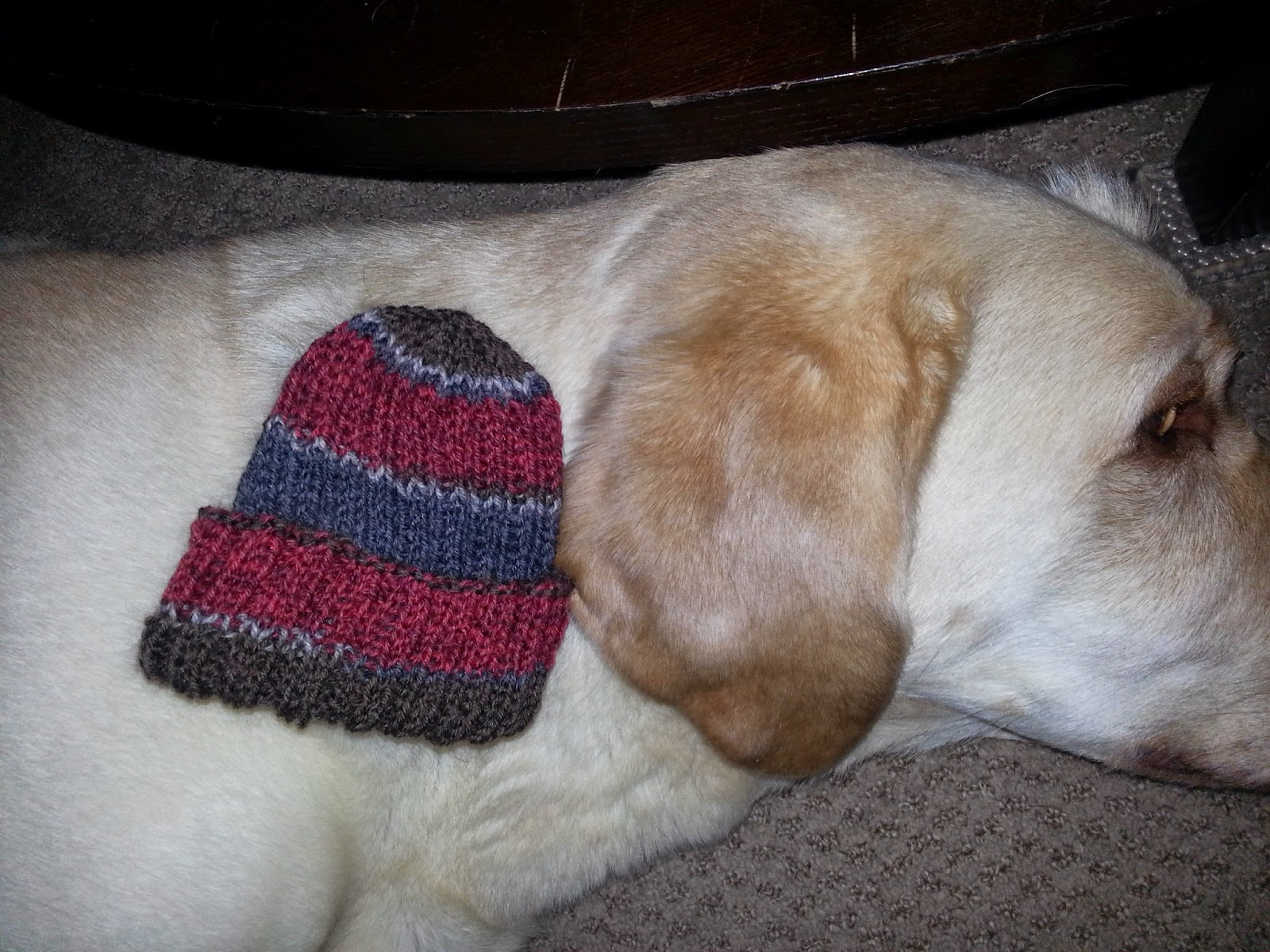 Another hat (same pattern) in Wandering Cat Yarns Alley Cat Sock. I forget the name of the colourway, but pinks! It's good to have a balance of boy/girl items in my baby knits stash. 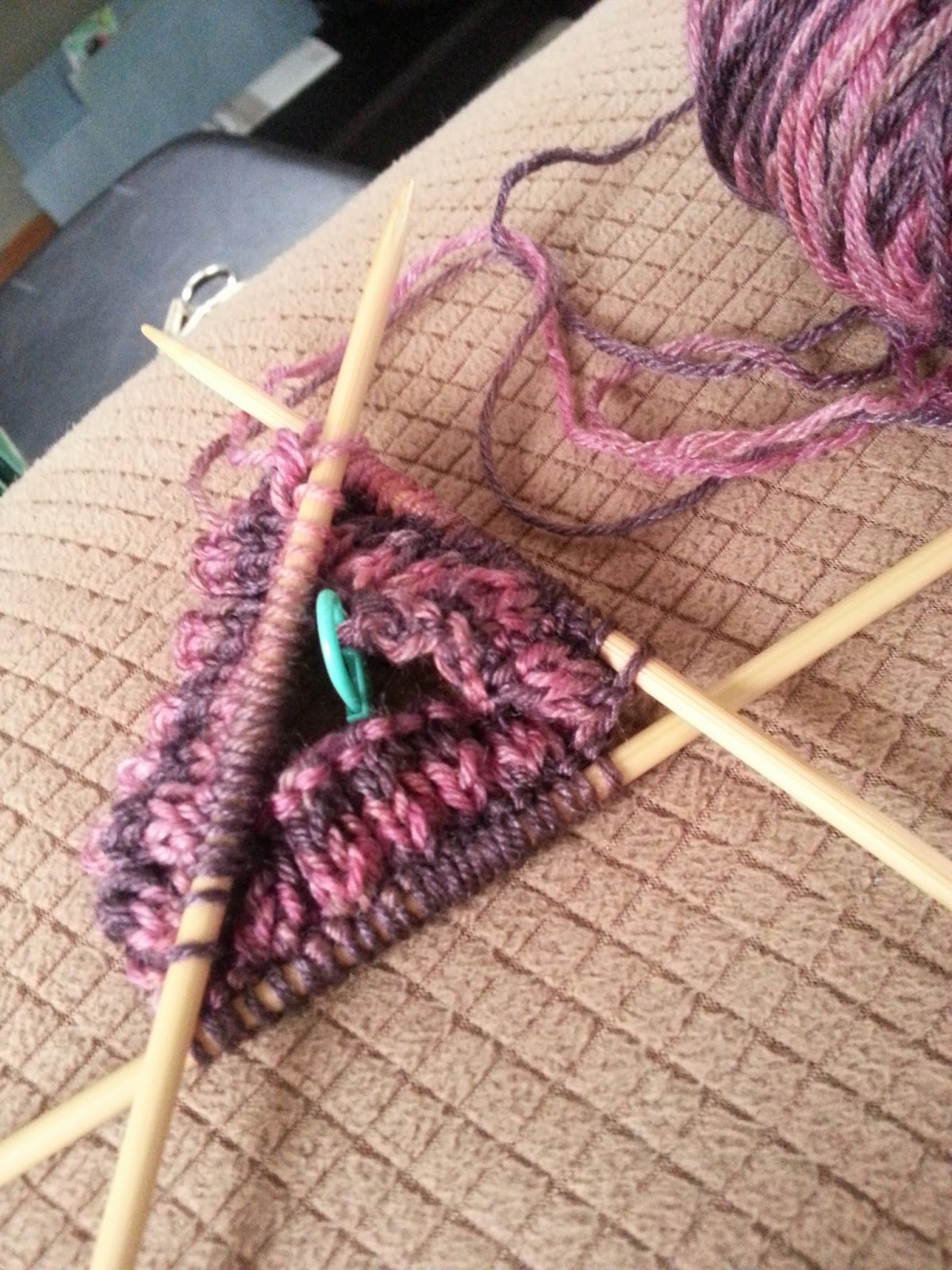 Have a good one folks!