Okay, I will admit I've been looking at orange kittens on the local cat rescue sites (even before Cecil passed away, I wanted a fourth!), but I honestly did not believe I'd find one.

On Saturday February 10th during the National Adoption Weekend at my work this little gaffer came into my store. It was only by fluke he arrived. He was scheduled to be put at another location for adoption, but one of the cats we had needed to go back to a less stressful situation. 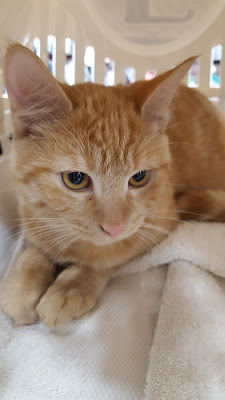 He is 8.5 months old, which is about four months older than what I was looking for in a new kitty, because I wanted a kitty who would be able to adapt to our other pets, our way of life (RVing with kids and pets) and, especially, being young enough that Queen Ezra wasn't going to have a hissy fit. Also, I had NO clue if he had ever been around dogs before, let alone big ones.

Well ... this guy won me over. He was relaxed, mellow, snuggly, and full of purrs.

I didn't tell my husband I was bringing him home, and I wasn't sure he'd be happy about my bringing another cat into the house (and lets be honest here, he was NOT happy at all). After work I packed him into the cat carrier (I keep one in my car) and hauled him home.

The children were thrilled. The husband, not so much. The dogs loved him immediately. The other cats, not so much.

Michael and the kids named him Marlin. Yes, like the fish. It was Michael's idea. I'm not sure what hat he pulled it out of, but I wasn't going to argue. I call him Marzipan.

Everyone is warming up to him now. Ruby plays with him quite a bit. Ezra plays with him a little, but she also lets him know she is the boss and her Rule is never to be questioned. Michael pets him and loves him up, but glares at me out of the corner of his eye to let me know he likes the cat, but he's still not thrilled with my decision to bring him home. He'll get over it. Or he won't. Either way this kitten will have a wonderful life of love and happiness.

Some people may think it's too soon after Cecil, myself included, but the wise words of Valerie ring true. "The time is right when the time is right. There’s no set time for mourning. He’s not a Cecil replacement, he’s his own little love, and he’ll help you all heal!"

2018 has proven itself to be a tough contender so far, which is one of the many reasons I haven't posted at all. Another reason is I've been lazy.

It started great, the first week and a half, fantastic! Michael had dental surgery that ended up being okay in the end but was problematic for him for about two weeks. I went to the doctor for a check up and have ended up needing a plethora of tests. I get my results on Feb 15th.

However the very worst part of 2018 was when Cecil got sick again. Around mid-January he started acting funny. We hoped it was just another bout of pancreatitis so we gave him pain meds, laxative and appetite stimulants like we did in October, as advised by our vet. We hoped and prayed it was not another case of him eating something foreign like he did in September when he required surgery. He wasn't getting any better so I took him in for a check up. His bowel was impacted. Far worse than in September. I had to make the difficult decision to have him euthanized. We talked about doing a second surgery to remove the obstruction from his bowel but the vet said she didn't think it would be successful because of the size of the mass. It took up a significant portion of his bowel. My poor baby. He was only 15 months old. He suffered from an eating disorder called PICA which gave him the unconscious desire to eat non-food items.

Michael, the kids and I miss him so much. He was such a special little guy. Ezra, Ruby, Dozer and Moose miss him too.