You Wouldn't Know It

You wouldn't know it, but I've got startitis ... this phenomenon doesn't appear because I haven't actually started anything. I'm just itching to start something. Maybe I just have Patternitis because I can't stop looking at Ravelry. So, once again I have no knitting for you to look at. Just daily photos.

Life has not been hectic, per say, but there's been a lot going on that has occupied my time and my mind, but hopefully soon I'll get back into the groove and get some knitting done.

Today is the last day of my February Run Streak. I've run every single day of February (and Jan 31st). I'm starting a March fitness challenge for myself too. I think it's a great way to keep myself motivated. It's going to be fun. :)


Michael flew back to work on Wednesday. It's always a loooong day when he flies out at 6am.


Poor Moose is being ignored ... another picture of Dozer ...


I visited with Miss Bessie today.

More to come. I've got some yarn coming in the mail (yay!!) and some skeins I need to wind into balls (yay!!) and then I'm going to REALLY start something.
at February 28, 2014 1 comment:

Sorry for the quiet around here, I've been quite busy.

And these are in the wrong order ... and blogger is being a pain so they'll stay that way.

Email ThisBlogThis!Share to TwitterShare to FacebookShare to Pinterest
Labels: aphotoaday

Canada for the WIN!

Woohoo! Canada's women won gold in both curling and hockey yesterday. The hockey game was AMAZING. I felt bad for the Americans at first because they played damned hard (and I still feel some empathy for their hockey team), but after reading online some of the comments American citizens were making about Canada I'm ABSOLUTELY disgusted about their reaction. They're horrible sore losers. The hashtag #FuckCanada is TRENDING on Twitter because the Americans are using it to diminish our awesome win. I know not ALL Americans are doing it and some have even congratulated the Canadians on the win (it really was a good game) but it just goes with the stereo types of the USA being ignorant and catty.

Anyway, we won and anyone who doesn't appreciate how hard those women (on both teams) fought can take a long walk off a short pier.

Good morning and Happy Family Day! Today is also the start of Tim Horton's annual Roll up the Rim to Win. If you're anything like me you rolled the r's in roll and rim. I don't drink Timmies coffee often, but when I do and it's Roll up the Rim time it's very likely I will win a donut (which I won't eat).


So I won! I finished my Ravellenic Winter Games knit, ahead of schedule. Don't get me wrong, I'm happy I got it finished, but I'm sort of disappointed too, because now I feel kind of naked and need to find a new project to cast on ... naked and idle. Never a good thing for a knitter.


I used four skeins of Wandering Cat Yarns Big Cat. The colour is a custom order called Sprout. The pictures don't do the colour justice. Maybe later I will get ambitious and go outside (in the freezing cold - 16C temps) to see if I can get a better picture of the colour.


Finished dimensions are 38" x 30" so it's a really good sized blanket. The pattern called for 158 stitches to be cast on and to use 5mm needles, but I cast on 122 stitches and used 5.5mm needles. I think the 5.5mm needles worked well with the yarn. I love how it turned out. There were variations in the skeins, two skiens were brighter and two were slightly darker. I started with the brighter one, did two darker ones and ended with the final brighter one. It gives it sort of a gradual look. I had thought about switching skiens every two rows to make it blend better but, honestly, couldn't be bothered. The difference in the yarns is so slight.


I think I may have to make another one of these ... perhaps a larger one for myself. I'm thinking 8 skeins of Big Cat would do it ... Hmmm.  Maybe a colour graduation from cream to dark blue or oooh crimson and back to cream again.  Hmmm.
at February 17, 2014 2 comments:

It's a long weekend for us; Family Day is Monday.

I love long weekends (and holidays from school and work). A lot of parents I know are anxious to have their kids go back to school during the summer or winter vacations. Not me. I love having them home. There will be a time, in the not too distant future, where their time off will be spent with Michael and I, and I am going to cherish every single moment now when they are home.

Friday was Valentine's Day, so it was only suiting that my photo for Friday be one of my greatest four loves.


Today Ethan had a play date with his friend who recently moved to a new school. This kid has smart parents, they gave all his friends his new phone number before they moved. They had a great time.


Lily can get away with anything when it comes to Otis.


Apparently he likes speed skating too.

I thought I'd treat you with an adorable picture of Moose as my photo for the day, however he is near impossible to photograph if he knows there's a camera out.

There, that should suffice as a cute enough Moose picture to keep you satisfied ... I will try for something more later. :)

Right now I'm watching hockey. Team Canada's Women ... it's a TOUGH game. We're in the 3rd period against Finland and the score is 0-0 ... TOUGH. COME ON LADIES! It's intense. Lucky my dogs are used to hearing me shout at the TV so it's not bothering their nap time at all.

My Ravellenic knit is coming along well. Today I have to wind two skeins into balls. I should have done it beforehand, but I didn't. It's not going to put me behind schedule at least. :)

Yesterday I couldn't find Moose ANYWHERE. I walked by Dozer laying on their bed 3 or 4 times ... yeah, I know. I think I need to get them a different coloured bed.

Today is laundry day ... well, I started yesterday but got distracted by knitting. So today I'm getting it all finished up. Dozer is helping.

I never did get a picture of Owen's hat up. Today I finally took a picture of it. It's not a great picture, but it's a picture. LOL I have more to say, but this hockey game is super distracting, so you're going to have to wait. :)

This morning I was up bright and early. I had no alarm going off, yet I was was awake at the same time my alarm normally would go off. Why? Because there was a tweenaged girl sleepover here last night and Lily and her friend were awake early, as was Ethan due to the result of the tweenaged chatter.

At first I was moaning and groaning about not having a sleepover. Then I realised they did me a favour. The Canadian Olympic Women's Hockey team was going to be in their first game (starting at 8am Ontario time; I don't know what that is in Sochi) and because of the tweenaged chatter I wasn't going to miss any of it. The ladies of Team Canada won their game against Switzerland with a SHUT OUT score of 5-0. Go team!! :)


My knitting is coming along really well. I'm about 10% done. The pattern is easy to remember and it looks fabulous in the Big Cat yarn. The stitches really pop. 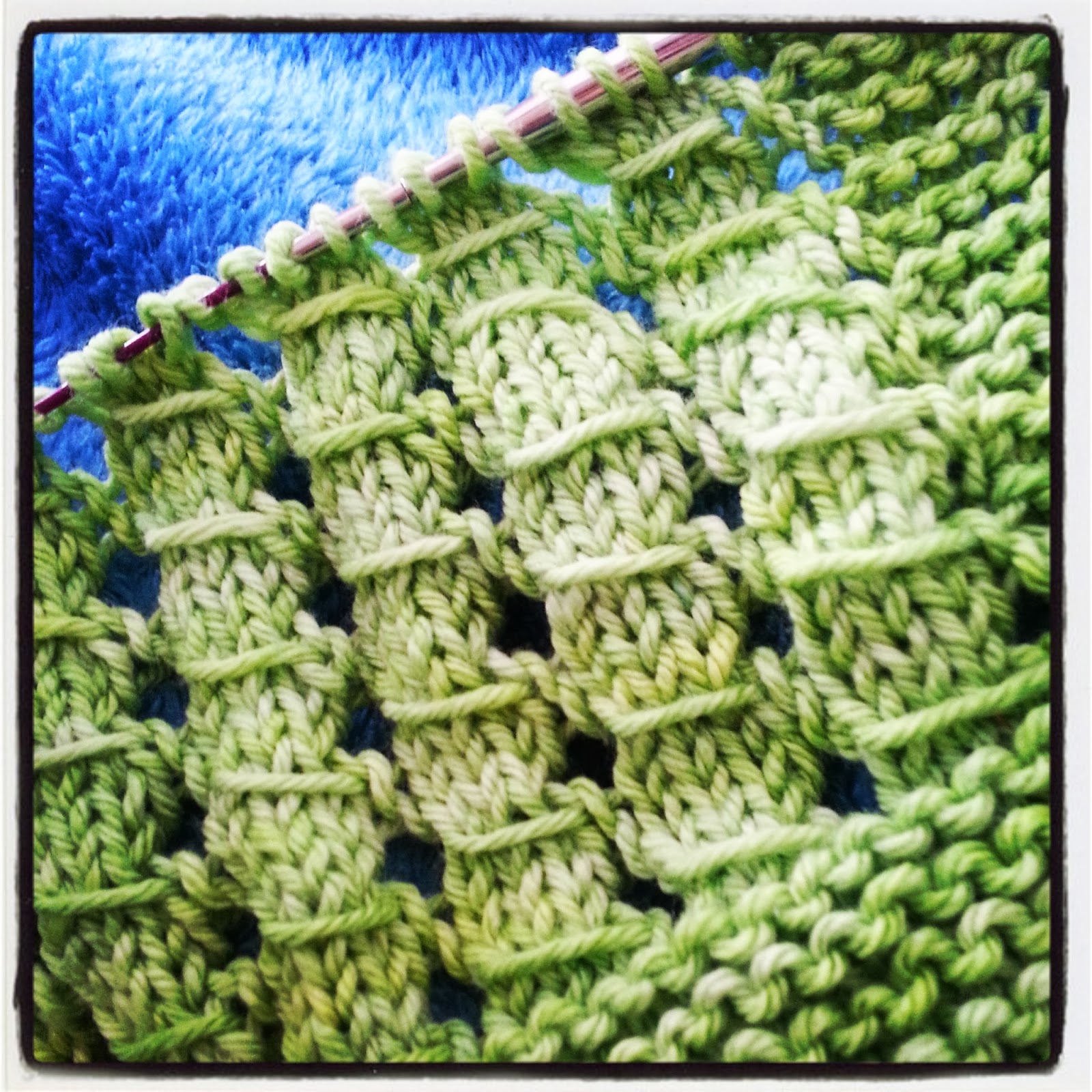 I'm really liking this knit. It's simple yet on the pattern row I have to pay just enough attention that it keeps it interesting, but not so interesting that I have to give it more focus than what's happening in the Olympic events. It's perfect. :)
at February 08, 2014 1 comment:

Another snow storm, another dig out.

I've maintained a strict policy of "Do Not Complain About Winter" so far this season. It's been a tough winter so far and it's not even close to being over.

I am SICK of winter, sick of snow, sick of it.

I was built for SUMMER; for heat and humidity.

This is me complaining. Officially.

Yesterday during the dig out I peeked out my window (well, it was technically before I started digging out) and saw that my neighbour and one of the work trucks from across the street had been involved in a slight fender bender. I didn't see what happened, but I'd wager the work truck was at fault. Those jackals think they own the road and zip and zoom like nobody's business. My nosey self got this as my first photo of the day (thus my photo #36).

Remember the booties from my previous post. They didn't look like much, but I promise they turned out super cute.

While I was attempting to take a picture of them this morning I had a little helper. More like a little photo-bomber. Dozer thought, perhaps, he'd make a better picture and this is what I ended up with.


Once he was done helping I did manage to get another picture.


The one on the right is upside down to show off the cute little bottom. I really like these booties and will probably make a couple more pairs for my stash of baby knits. I'm thinking bright colours stitched together with contrasting bright colours. So cute. :)
at February 06, 2014 2 comments:

I've been a slacker in the knitting department over the last week or so ... the actual knitting bit, I've been hanging out on Ravelry a lot ... and I've actually narrowed down my Ravellenic Winter Games project to ONE thing. That's right folks, I've decided.

I'm going to be knitting Waffle Blanket for the Ravellenic Games. I will be using Wandering Cat Yarns Big Cat in Sprout (which is as green as the name depicts). I got the yarn waaaay back when my sister was pregnant with her 2nd son and started knitting a leafy lace blanket for him. However, I saw something shiny, got distracted, totally forgot about it, lost my pattern (thus my place) and it had to be frogged. Now I have the opportunity to knit it into a blanket for another baby boy (he's due in April, coincidentally my nephew was born in April 2013).

I don't know the baby or the parents and in all likeliness won't meet them. The dad is Michael's co-worker in Saskatchewan. I just like knitting baby stuff. :)

Today I knit a little pair of booties. I just have to seam them up into shape. I think they're adorable. I will probably add these to my booty rotation. Too cute. The pattern is Biscotte Booties. I used Patons Decor on 4mm needles, the colours are Rich Grey Heather (dark) and Grey Heather (light).

They don't look like much right now, but soon they will be super cute, I promise. :)

Speaking of super ... here's a picture of Jenny, Michael and I as we crossed the finish line at the race on January 26th. I bought this from the photographing company who was at the event ... I'm getting prints made. I especially love it because none of us is touching the ground, it looks like we were flying. :)

Michael headed off to Saskatchewan this morning. His flight left super early, so we had to be up and out of the house by 5:30am. It's been a long day. Thankfully I don't have much to do, so I watched the Season 6 finale of Sons of Anarchy and knitted booties. :)
at February 04, 2014 2 comments:

I don't have much to say so I'm just going to post the photos I took for my Photo A Day Challenge. Enjoy!