I've been a busy girl this week. I've completed the sign for my neighbours. Today I applied the top coat rain protection stuff over the letters and all I have to do now is wait for it to dry and we're good to go!

I did the lettering differently this time. Rather than cutting out the letters and using them as stencils I used pencil on the back of the print out and traced it like carbon paper (if that makes sense) and then free handed the lettering.

My neighbours on the other side would like a Harry Potter themed sign. There are two sites there, owned by one family, so my idea was to create one sign for them both and put it in the center. For their sign I wanted to do something joined, but it still had to be HP themed. First I thought of a brilliant idea - Harry's glasses - but when I drew it out it wound up just looking like boobs. Then I thought of a Yin-Yang to represent the joining of the two sites, but it is not really HP themed. Then I googled HP things and came up with the oracle from Professor Trelawney's class. 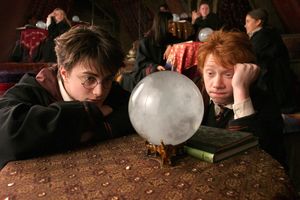 This is what I came up with ... sort of an oracle combined with the yin-yang, but with the tails pointing towards the sites. I like it. I hope they do too. 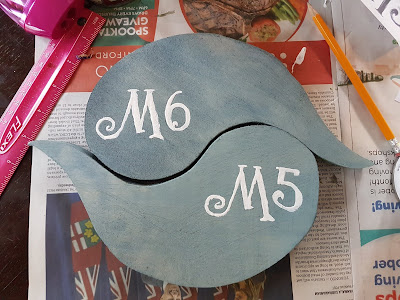 The lady from site M2 messaged me today. She wants Narnia. It is going to be a harder one for me, because while I have watched the movies and read the first book I'm not as familiar with it as I am with other adventurous fairy tales. She doesn't need her sign until the Spring so I have all winter to design in. M5 and M6 are only getting their site #'s right now. The rest will be done over winter after I get a chance to talk to them about the cost.
at October 04, 2018